You probably think you know everything about what the Greatest Common Divisor is and how to calculate it quickly! Well, that’s most probably the case, but just in case you do not remember all the details then here’s a short post about the GCD! (All the code is available here)

Let’s start with the basic procedure everybody learn in the first week of any introduction to computer science class:

I call this the safe_gcd since is very easy to remember and hard to screw up when coding. This code implements the original algorithm described in the book Elements from Euclid which is supposedly being one of his inventions, although there are people which believe that it might be already know some two hundred years before Euclid, or at least by a certain Eudoxus about 100 years before Euclid.. But that’s not that relevant after all..

The procedure works perfectly and it’s simple to code, an iterative implementation follows immediately from the recursive code:

This algorithm works perfectly and has served humanity for hundreds of years, it will require at most

steps to calculate the GCD of a,b where

. Things get’s interesting if one attempt to make some improvement on this basic algorithm.

One possible optimization designed to reduce the amount of step required to calculate the GCD is obtained by noting that given the division algorithm:

) if a and b are integers with

, which in turn means that if

can be substituted by

This is list of steps performed by the standard algorithm:

And this is the list of steps performed by the improved algorithm: 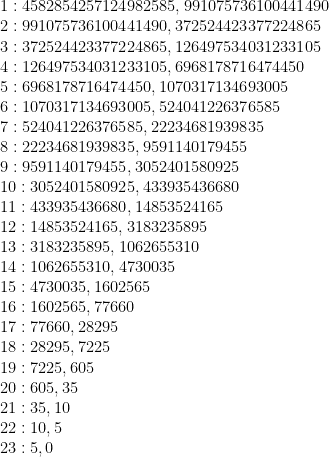 Well, looks good! from the 36 steps required to calculate the GCD with the standard algorithm to just 23 with the improved one, on average this implementation will be faster of a factor of

, but keep in mind that the increased amount of operations which the computer need to perform during each iteration will reduce slightly the advantage of this procedure over the basic implementation, let’s see the code:

As you can see there’s some more computing here, but at least on paper this is faster the the basic algorithm, see the last paragraph for some benchmarks results.

In 1961 Josef Stein discovered a cleaver way of improving the GCD algorithm by exploiting four simple facts about positive integers and GCD:

For more details you might have a look at Wikipedia or much preferably to the venerable Knuth bible. Given those facts a very basic implementation of the binary algorithm is the following:

This is a little more complex implementation that the previous one, but should be reasonable faster in real applications even if the asymptotic bound is the same as for the original GCD algorithm. After a short evaluation you might notice that this is exactly the same code as the safe_gcd_it with one additional loop for exploiting the rule n. 1/2 and few additional operations for the rule 4 and 3.

To verify which of those algorithms is faster let’s run a benchmark, you might test this code by yourself cloning it from my repo here.

To test those algorithms I’ll generate a certain amount of random pair of numbers {a,b} which then I’ll use to feed each of the functions we have seen here, the time required to execute the procedures is taken by the venerable chrono::high_resolution_clock functionality.

Running this simple bench program on a set of 5000000 pair of numbers with the code compiled with -O3 using the latest clang, the output is the following:

Looks like the safe and simple implementation of the GCD algorithm is the slower one! The faster algorithm seems to be the one discovered by Stein, that is somehow expected since even from the theoretical standpoint the average complexity of the binary GCD is out-performing the basic GCD.

I attempted a second test changing the input data, this time on a sequence of increasing integers

where n is the amount of input. This time the sequence will not contain very big numbers but at most n and thus the difference between two a,b would be no at most n, whereas in the previous test the difference might have been at most numeric_limits<long long>::max(), the output is the following:

In this particular execution safe_gcd_it is slower than safe_gcd, but running this experiment multiple times you’ll notice that those two functions frequently switch between themselves the last two position of the result list (Are always slower than the other algorithms)

I ran this latest test with the same amount of input (5000000) but as you can see now the execution time for all of them is lower than the previous test, the reason is that is much less frequent to encounter extreme values of input where

or vice-versa, which means than on average the amount of steps will be smaller (For all the algorithms).

But still, seems that the binary version of the GCD algorithm is the faster, followed by the optimized Euclid algorithm, that’s nice to know.